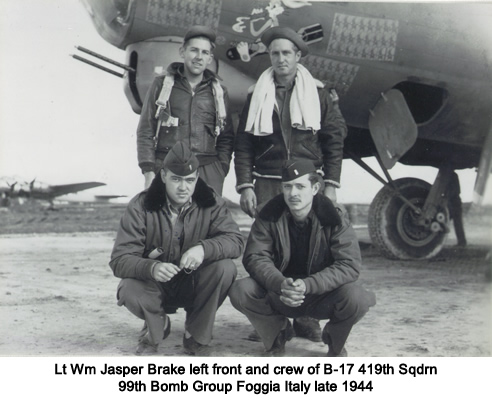 (The following summary was written by Hugh Harrington)

When the United States entered World War II after the Japanese bombed Pearl Harbor on December 7, 1941, American men came forward in huge numbers to answer their nation’s call.  Bill Brake wasn’t one of them.  Always a leader, Bill had joined the military long before the call to arms.

In 1935, Bill had entered Georgia Military College High School as a ROTC Cadet.  After graduating he entered GMC Junior College.  In 1940, as GMC Cadet Captain and Company Commander, he entered the United States Military Academy at West Point.  Normally, he would have spent four years at West Point.  However, our entry into the War created a severe demand for officers so the curriculum was curtailed enabling Bill to graduate in June 1943.

Like his classmates Bill was now a 2nd Lieutenant.  However, Bill was also a pilot in the U.S. Army Air Corps.  In 1933, at the age of 11, Bill had flown in his first airplane and the memory had never left him.  During his years at West Point Bill had learned to fly, first at Douglas, Georgia and later at Stewart Field, in Newburgh, New York, just north of West Point.

Bill, a hard working man, knew what he wanted.  However, he wasn’t always at work or flying, as he found the time to win Anne Grinstead.  A month after his graduation from West Point they were married in Sebring, Florida where Bill was learning to fly the big B-17 bomber.  After further training Bill was assigned to Drew Field, in Tampa, Florida as Instructor Pilot & Crew Training. 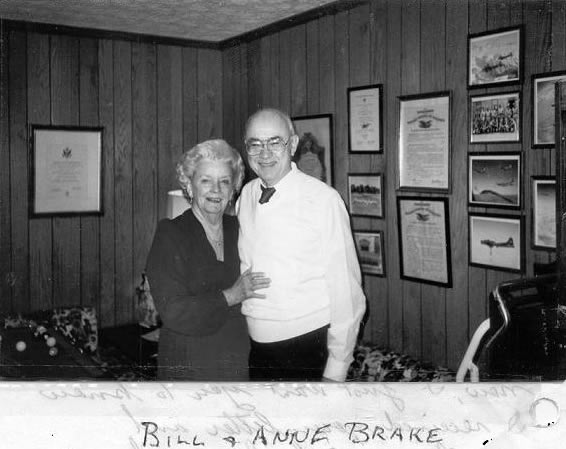 That summer of 1943 the War was raging in Europe and the Pacific.  The United States and its Allies were struggling.  All of Europe had been conquered by the Germans.  However, American and Allied bombers were flying missions over Nazi held Europe.  It was a battlefield like no other.  Hundreds of bombers, and thousands of men, would fly in the cold, thin air five miles into the sky, to drop bombs on the enemy’s factories, railroad marshalling yards and strategic targets.

The B-17 bomber, huge in its day, had a wingspan of  104 feet, was 74 feet long and weighed 60,000 pounds.  Cruising speed was 180 mph and it carried thirteen .50 caliber machine guns and a crew of 10.  It was unheated and unpressurized.  Above 10,000 feet the airmen wore oxygen masks.  To be without oxygen, even for a few minutes meant unconsciousness and even death.  The cold was bitter at the high altitudes, temperatures of minus 20 or even -50 degrees were common.  The men wore electrically heated suits which were prone to failure, overheating or even catching fire.

Despite its armament, and flying in close formations for mutual protection, the toll on B-17s  was staggering.  Enemy fighters could sometimes be kept at bay by friendly fighters escorting the bombers.  However, enemy flak was deadly and there was little that could be done to defend against it.  The Germans would fire 88 mm radar guided anti-aircraft artillery which could easily reach even the high altitudes of the bombers.  Some targets were defended by hundreds of air-aircraft batteries.  The flak could be fierce…and lethal.

In April 1944, while stationed stateside training men for combat, Bill’s older brother Darwin, Darja as Bill called him, was shot down and killed over Italy while flying a nightfighter.  This was a blow to the entire family.

Five months later, Bill was assigned B-17G number 44-6532, fresh from the Douglas Aircraft factory in Long Beach, California which he flew across the Atlantic to the US base at Tortorella in Foggia, Italy.  He was in the 416th Squadron, 99th Bomb Group, 15th Air Force.

On the morning of October 12, 1944 Bill, who had just turned 23 years old, flew his first combat mission.  He wasn’t flying the familiar 44-6532 which had carried him across the Atlantic.  He was at the controls of a similar but unfamiliar aircraft. (Incidentally, 44-6532 was shot down December 19, 1944 over Germany)

Hurtling down the runway for takeoff, the B-17 fully loaded with bombs and fuel, was a death trap if an engine failed.  With the end of the runway fast approaching the heavy bomber lumbered off the ground, held in the air by four screaming engines, the wings and the will-power of Bill Brake on the control wheel.  It was just one of many dangers that Bill would become accustomed to as part of the job.

The mission was to Balogna, a city in northern Italy where Bill’s B-17 would drop 3 tons of bombs.  While tensely flying in tight formation with the other bombers Bill’s radioman notified him that their aircraft was being called on the radio.  The voice they heard was Axis Sally, the American traitor, saying “Good Morning, Lt. William Brake.  Welcome to the skies over Europe.  We know that you’re a newcomer to the 99th Bomb Group.  Also, that your wife, Anne, misses you and wants you to come home to Dublin, Georgia, but we have other plans for you.  If we miss you today we will look for you in the days ahead.”  It was a chilling reminder, as if Bill and the crew needed one, that they were in a combat zone where death waited.

The welcome sight of the escorting American P-51 Mustang fighters made everyone feel somewhat better.  These particular aircraft had the red tails of the Tuskegee Airmen.

As the bombers entered the bomb run, a couple of minutes before reaching the target, they had to fly straight and level, in very tight formation….sitting ducks for the anti-aircraft batteries.  Suddenly, the flak was exploding all around them.  Bombs away!  6,000 pounds of explosives fell on the enemy.  The aircraft was jolted from the anti-aircraft fire but fortunately, this time, none were fatally close.  On other missions his aircraft was seriously damaged by flak.

As the formation turned away from the target Bill checked his crew.  Everyone, and the aircraft, was alright.  The flight back to base was uneventful.  The first mission was over, but it had not been easy.  As he was later to write, “I think the Lord was definitely shielding us.”

Service after the War: