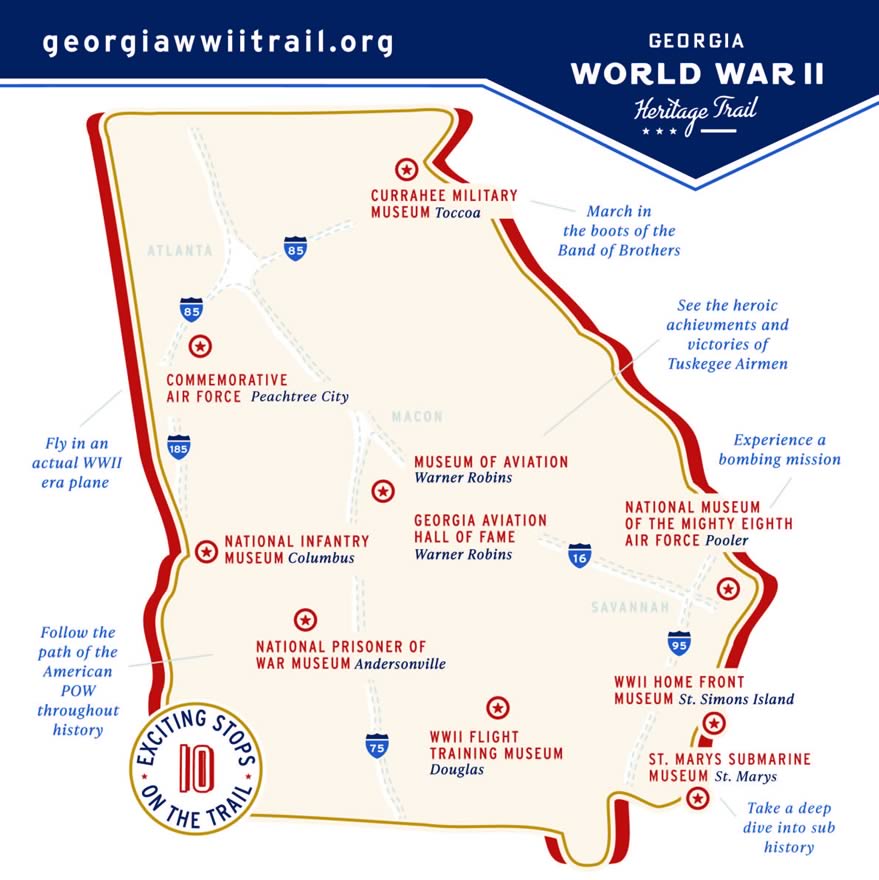 Southern states were critical to the war effort during World War II (1941-1945), and none more so than Georgia. Over 300,000 Georgians served in the military, and thousands of civilians worked in rapidly expanding wartime industries.

As the United States mobilized for war abroad, federal defense dollars flooded the South in the form of military installations and defense contracts. At bases throughout Georgia, servicemen and women were trained in many forms of warfare, to include infantry, parachute, glider, and armored forces. Innovative tactics and technologies were at the center of much of Georgia’s war effort. As military leaders grasped the importance of new strategies, the training of pilots, paratroopers, and radar operators became a top priority. Once abroad, servicemen from Georgia experienced all the harsh realities of war – from home sickness and combat to capture by the enemy.

Additionally, Georgia threw its industrial might behind the war effort. Citizens on the Home Front actively supported the war by doing everything from buying war bonds to working in the two Liberty shipyards located in the state. Job opportunities opened up for women, African Americans and other groups as industries mobilized, requiring tens of thousands of workers.

The World War II Flight Training Museum in Douglas has partnered with ten sites across the state to bring the World War II experience to visitors. Take flight in a WWII aircraft, build a Liberty Ship, explore a pilot training base, march in the boots of the Band of Brothers, and learn personal stories of service and sacrifice. Pick up a passport at any member location and begin your historical adventure today! Buy a passport for $5 at any of the participating locations and have it stamped as each location is visited. Also available at each trail stop is a lovely coin specific to that location. Each coin costs $8.

Learn more about each stop on the Trail

Be sure to check with each stop to make sure it is open. Some locations are closed due to Covid-19.

Currahee Military Museum: In 1942, the U.S. government acquired a site in Toccoa, Georgia where specially selected men received training to become a new type of soldier – the paratrooper. The Currahee Military Museum focuses on the actual training these men went through that made them some of the most physically fit men in the U.S. Army. March in the boots of the 101st Airborne Division, the Band of Brothers! See https://www.toccoahistory.com/.

Georgia Aviation Hall of Fame: Salute the honor, bravery, and lasting impact of our heroes. The Georgia Aviation Hall of Fame promotes and encourages the growth and public support of aviation within the state of Georgia by honoring aviation leaders, living and dead, whose extraordinary achievements or services have made outstanding and lasting contributions to aviation. See https://www.gaaviationhalloffame.com/

Museum of Aviation: The “Scott Hangar” named after Gen. Robert Scott, author of God is My Co-Pilot, contains numerous World War II aircraft and displays. This hangar also includes exhibits about the Tuskegee Airmen and the 507th Airborne Division. See the heroic paths and victories of Tuskegee Airmen–true heroes of the war. Visitors can view the ongoing restoration of a B-17 Bomber! See https://museumofaviation.org/ .

National Infantry Museum: Voted the Best Free Museum in America by readers of USA Today, the National Infantry Museum honors soldiers from 1775 to today. Their stories of service and sacrifice are told through priceless artifacts, state-of-the-art exhibits, interactive galleries and memorials to the Vietnam War and the Global War on Terrorism. The Last 100 Yards ramp – the museum’s signature attraction – recreates the Rangers’ scaling of Pointe du Hoc on Omaha Beach and the parachute drop on Corregidor during World War II. The museum’s largest gallery chronicles our nation’s war on fascism. And outside, an authentically recreated World War II Company Street takes visitors back to the 1940s. See https://nationalinfantrymuseum.org/ .

National Prisoner of War Museum: The National Prisoner of War Museum preserves and shares the stories and experiences of all American POWs, from the Revolutionary War to today. It includes displays, artifacts, immersive galleries, oral history interviews, and other information about POWs of World War II. See https://www.nps.gov/ande/planyourvisit/natl_pow_museum.htm .

World War II Flight Training Museum: You are on this museum’s web site. As can be found in the information on this site, the 63rd Army Air Forces Flying Training Detachment (Primary) was originally a part of South Georgia College’s pilot training program. From 1941-1944, somewhere between 5,000 and 10,000 cadets were enrolled. Here the cadets mastered basic flying maneuvers and learned to fly. The museum houses exhibits on the 63rd’s training, aircraft, and equipment. Explore the most intact WWII contract pilot training base in Georgia, and possibly the entire country. Go to this website’s home page at https://wwiiflighttraining.org .