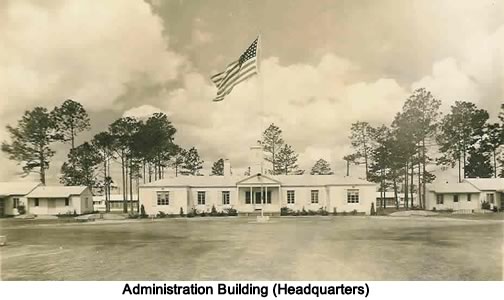 After Pearl Harbor and the declaration of war on Dec. 7, 1941, the U.S. ramped up its war effort. The number of instructors at Douglas increased over the course of 1942, from 45 in January to 75 in December (Records of Raymond-Richardson Aviation Company). The number of cadets increased as well, with an average of roughly 200 cadets on base. The flying instructors and the building of facilities continued to be run by the contractor, the Raymond-Brinckerhoff Aviation Company, while the oversight of mechanics, cadets and the hospital was in army hands.
Pelting winter rains fell in January of 1942, and at times the whole area was covered in water, and boardwalks floated away. The base building was hampered miraculously little by this inconvenience, as drainage ditches were deepened and grading of fields continued.

In February 1942, Headquarters overflowed and took over the Recreation Building.

In March 1942, the main field grew to 3,500’x3,500’, and three auxiliary fields were being cleared. By April a road was staked out through the building area, concrete sidewalks appeared and new barracks sprang up like mushrooms. In May 1942, West Point Military Academy cadets arrived with the new class and became part of the class of 1942k. The headquarters building, enlarged to take care of the rapidly growing operations and expanse of administrative activities, was completed the first of June (63rd AAFFTD Yearbooks). 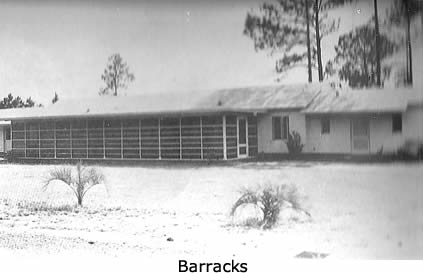 Equipment was brought in, such as Link Trainers, and a Link Trainer building was added in 1942 (cf. Waiver of Rights). The athletic field was greatly expanded to include baseball diamond, volleyball courts, 4 tennis courts and an obstacle course. Eventually a basketball court was added as well (cf. Interviews in 1944).

Six more barracks were completed in 1942, bringing the total to 10 barracks. Hangar number 3, the flight control tower, and additions to the mess hall were also completed (cf. Waiver of Rights). In addition, all four of the auxiliary flying fields used by this detachment were added in 1942. With increased operations and larger classes of cadets this detachment continued to grow with leaps and bounds.

Major W. P. Brett, C.O. of the base, was transferred in May 1942, and First Lieutenant John T. Stickney assumed command.

For one cadet’s experience on his arrival and experience at Douglas during July – September 1942, click here for Cadet John Blair Watson’s write-up (a PDF).

The rapid expansion of effort put stress on all aspects of the base. Among the shortages were mechanics and medical personnel. In August 1942, a mechanic school was started, but there was a shortage of draftees and potential mechanics (Letter from Capt. Stickney). Women were taken into the school to fill the gaps. 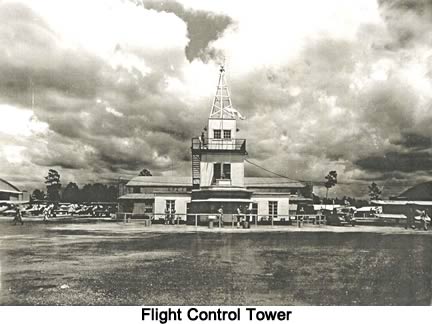 Despite the addition of barracks in 1942, an acute housing shortage remained. Additional barracks were ordered that were begun in 1943. 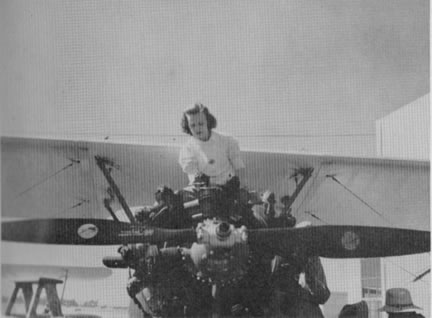 George Brinckerhoff, vice president and flight director for the contractor, had a disagreement with the Army supervisor, and Brinckerhoff resigned on July 28, 1942. Wesley Raymond and Robert Richardson reorganized the company as Raymond-Richardson Aviation Company, the name that would be identified with the base for years to come.

In April, 1943, Major Thomas W. Bonner assumed command and under his leadership the detachment continued to grow and maintain outstanding records of achievement. During 1943, the program continued to expand, but toward the end of the year the trend started to reverse as the end of the War came into sight. The number of cadets in training started to drop.

Below is a table of cadets reporting for training at Douglas, the number that washed out for flying deficiencies, and the number passing to go on to Basic flying training. Classes are designated 1943, 44, etc. in the approximate year of graduation. Some cadets left for health or other reasons, and so the numbers are not intended to total across the row.

The pilots who earned their wings here went on to fly and fight in every major theater of the globe spanning war – in the skies of America and North Africa, at palm tree level over the islands of the Pacific, over the humid Indian Ocean, the lonely stretches of the North and South Atlantic, and hopping the deadly hedgerows of France. The 63rd FTD men flew bombing runs over Germany, transported important war cargo over the Himalayan “hump”, shot down Messerschmitt fighters over Italy, and soared through blazing anti-aircraft fire as a matter of daily survival. The men that came through this single base, just one of the first of what would eventually be 65 such schools across the country, flew well and fought hard. During the war, many former cadets won awards and honors and some gave all for the continued freedom of our nation.

On Dec. 28, 1944, when the Army Air Forces realized that the end of the War was approaching and that it had an excess number of pilots, the Douglas 63rd AAF Contract Pilot School, like many others, was abruptly decommissioned and returned to Douglas as a civilian complex operated by the City of Douglas.

Interviews of Ben Stroup, engineer for the contractor, on January 26, 1944 and Lt. Leonard A. Frank, physical training director, January 26, 1944, as cited in The History of the Douglas Primary School, compiled by Theodore F. Meltzer, 2nd Lt., Air Corps.

Letter from Capt. Stickney to Raymond Richardson Aviation Co., File no. 353, August 11, 1942, as as cited in The History of the Douglas Primary School, compiled by Theodore F. Meltzer, 2nd Lt., Air Corps.