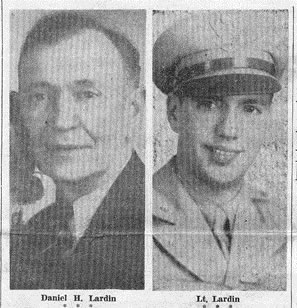 A Creighton father and his soldier son, killed in an airplane accident in England during World War II, will be buried side by side tomorrow afternoon in Mt. Airy Cemetery.  They are Daniel H. Lardin, Creighton contractor, and Lt. Daniel C. Lardin.

The father died in Allegheny Valley Hospital Wednesday morning after a long illness.

Members of the family were aware at that time that the body of Lt. Lardin was on the way.
When it was learned that it would arrive in Columbus yesterday, plans were to rush it here.
A.W. Ferver, of the Ferver funeral home, left yesterday for the Ohio city and claimed it immediately upon its arrival.  The young soldier’s casket was placed beside that of the father in the funeral home this morning.

Original plans to hold the funeral of the father this afternoon were changed so that joint rites might be held tomorrow.

The casket containing the body of the son was placed beside that of the father in the funeral home this morning.  It was brought from Columbus, Ohio, last night by A. W. Ferver.

Lt. Lardln was killed December 23, 1943, in the crash of a bombing plane of which he was pilot.
He had been overseas but five months. He was 23 years of age at the time.

A graduate of Tarentum High School, he was employed at the New Kensington plant of the Aluminum Company of America before entering military service. He is known to his friends as Buzzy.