Cadets went through a series of schools as they prepared for flying assignments. First they went through basic training and then were assigned to College Training Detachments (CTDs), where college courses and military training went on for 6 months. CTD was generally on college campuses and many of the courses were taught by college professors. 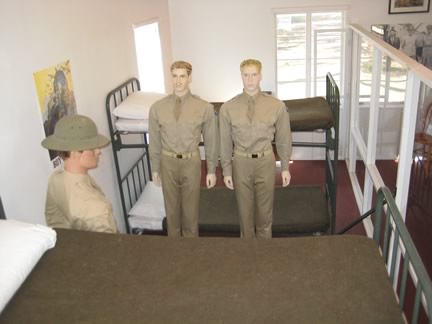 After completing CTD, they went to Preflight, which was at military bases. Many Douglas 63rd cadets’ Preflight center was Maxwell Field in Montgomery, Alabama, which was the Southeast Flight Training Command center. Preflight was generally 10 weeks, with one half the time involving coursework such as military customs, law, theory of flight, naviation, Morse code, aircraft and naval recognition, math, physics, and chart interpretation, and the other half of the time involving outdoor military training, such as shooting .45 calibre pistols, .30 calibre carbines and Thompson submachine guns.

After receiving their Preflight training at other bases, cadets came from all over the U.S. for their Primary training at Douglas and become part of the 63rd Flying Training Detachment. Even some international forces, such as from Australia, arrived. At Douglas the cadets received 100 hours of ground school training and time in the Link Trainer flight simulator. They quickly began their actual flying training in PT-17 training planes, also known as Stearman biplanes. They were to solo after 10 and before 13 hours of flying and were required to have a minimum of 25 landings with an instructor before soloing. By the end of the program, they completed 60 hours of flying in all. A minimum of 175 landings was required in the full program. If they passed their courses, they moved on to other bases that had basic flying training and advanced schools and were assigned to bombers or pursuit planes (see below). 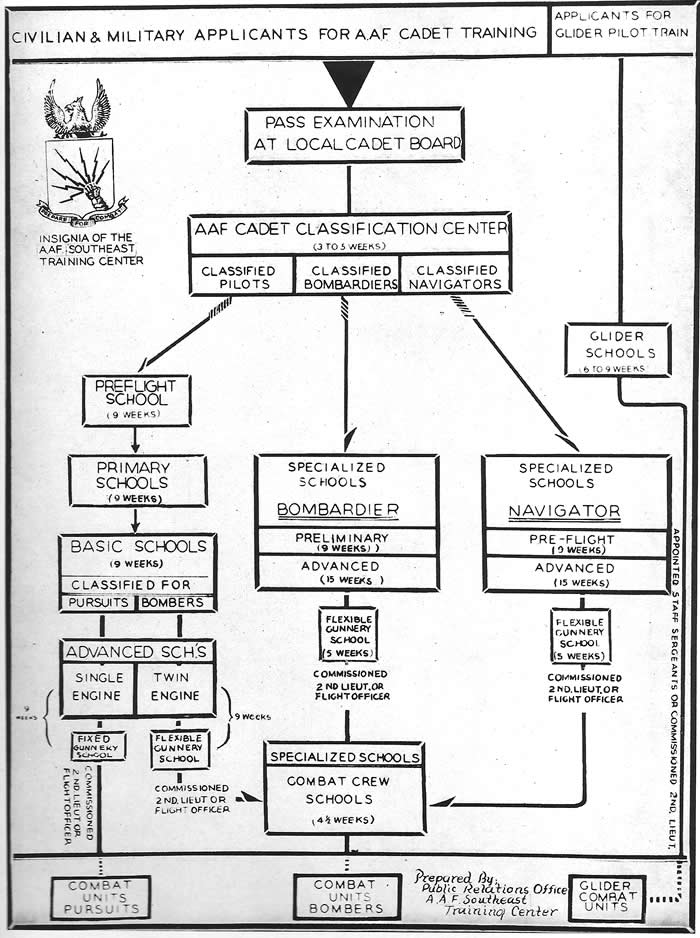 Diagram entitled “Civilian & Military Applicants for A.A.F. Cadet Training” is from 63rd AAF FTD yearbooks published during the War. Caption of the diagram reads: “The Best Training in the World” sounds like a big statement — and it is — but that’s what America’s young men get when they are accepted by the Army Air Forces for training as pilots, bombardiers and navigators. The chart, prepared by the AAF Southeast Training Center, shows the progressive stages of training Army aviation cadets undergo from the time they pass the physical and mental examinations at a local board or Army Post, until they emerge as Second Lieutenants or with the newly created grade of Flight Officer. [Both ranks carry the same pay, and Flight Officers may later be commissioned as Second Lieutenants]. Upon graduation from the last stage of Training Center preparation, the young officers are assigned to a Combat Unit and are ready to meet the enemy. And because of their exceptional training, they will meet him on better than even terms in knowledge and ability.  That means greater safety for themselves — and bad news for their opponents. 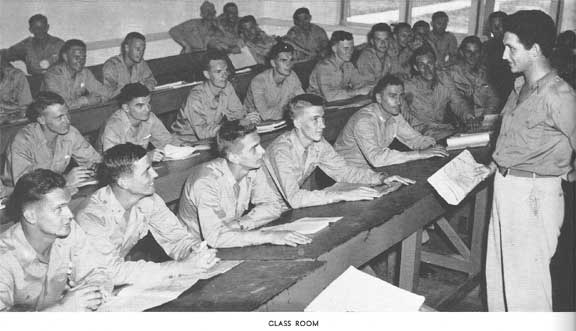 Primary flying training at Douglas with the Raymond-Richardson Aviation Company contract instructors involved flying straight and level, climbs, climbing turns, glides, gliding turns, the use of trim tabs, and landing. As experience was gained, short takeoffs and spins were added. Once a pilot successfully soloed, his companions would dunk him headfirst into a rainwater barrel (Edwards, 2005). It was a washout offense if the cadet did not solo before 13 hours.

Ground loops upon landing were also a hazard to graduating. Ground loops occurred if the cadet allowed the plane to swerve to the left or right, causing the plane to tilt and drag the outside wing on the ground as the plane turned. The damage to the tip would cause the plane to be out of commission for several days as the wingtip would be repaired.

After soloing, instructions emphasized stalls, spins, forced landings, loops, snap rolls, and crosswind landings at auxiliary airstrips. The cadet graduated after he did a final test flight with an army pilot officer.

For an excellent account of training, requirements and feelings through the eyes of one of Douglas’ cadets, William F. Hanchett, click here (a PDF will open in a new tab).

If the cadet made it through Primary at Douglas, he would go on to Basic Flying Training. After Basic came Advanced Training and hopefully graduation.

To summarize, the sequence of training was:

Interview with Joseph T. Massey, Director of Ground School, on January 17, 1944, as cited in The History of the Douglas Primary School, compiled by Theodore F. Meltzer, 2nd Lt., Air Corps.