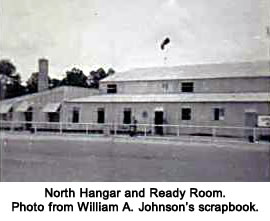 Formerly called the South Georgia College Airfield, the airstrip was owned and operated by the nearby two-year junior college. Besides a single grass strip, the airfield consisted of just one small hanger barely large enough to hold a single plane.

The 63rd AAF Flying Training Detachment had its beginnings in 1939 when Mr. Wesley Raymond of Macon worked with South Georgia College and the Civil Aeronautics Authority to form a Civilian Contract Pilot School under the Civilian Pilot Training Act of 1939. This Act authorized the Civil Aeronautics Authority to conduct a program for the training of civilian pilots through educational institutions and to prescribe pertinent regulations with the objective of providing sufficient training to prepare a student for a private pilot certificate. The act authorized $5,675,000 to be appropriated for the program during fiscal years 1939 and 1940. On the basis of this legislation, CAA’s program for the 1939-1940 school year called for training 11,000 civilian pilots (cf. FAA Historical Chronology). 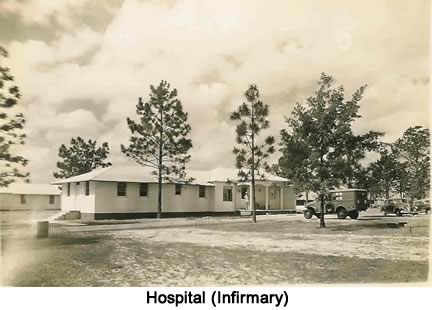 The Raymond-O’Neal Aviation Company, a civilian organization, was contracted to build and run the school at Douglas. The Army, however, approved building plans and design. Wesley Raymond (president), Wesley’s wife L. C. Raymond (vice president), and B. P. O’Neal (secretary/treasurer) were the officers of the Raymond-O’Neal Aviation Company. However, before actual operations began, O’Neal withdrew when construction costs started to add up and he thought the venture too risky. A new organization was formed and financed by A. C. Burnett and George Brinckerhoff. Robert Richardson (the son-in-law of A. C. Burnett) became secretary/treasurer; George Brinckerhoff became director of flying; and A. C. Burnett became director; Wesley Raymond remained as president. In August 1941, the name of the organization thus became the Raymond-Brinckerhoff Aviation Company (cf. History of 63rd Army Air Forces Contract Pilot School (Primary)). 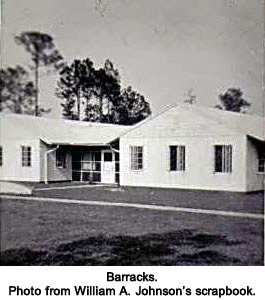 “In August, 1941 Lieutenant W. P. Brett, Commanding Officer, and Lieutenants John T. Stickney and Thomas E. Persinger began operation in one l0’x12’ building, with no office equipment and a landing strip of 800’x2,600’, surrounded by low flat land, studded with pine trees and stumps. By October there were two barracks and Mess Hall completed, and the first class of Cadets arrived” (63rd AAFFTD Yearbook). In 1941, auxiliary fields, hangars, barracks, mess hall, infirmary, and ground school buildings were built. In September, five PT-17s were flown in, and the training of instructors and mechanics began. On Oct. 5, the first class (labeled class 1942D) of 50 cadets arrived. There were 18 mechanics, 16 flight instructors, and 2 ground school instructors. At that time building construction was 75 percent complete based on a plan of 100 cadets, but since the first class was smaller than expected, there were adequate facilities. The flying field was 38 percent complete. An auxiliary field was 25 percent complete.
According to the 63rd AAFFTD Yearbook, “With pioneering spirit this first class learned to take off east and west regardless of north and south winds, and when hurricane winds swept the post, they hung onto the staked-down wings of planes and prevented any damage.” 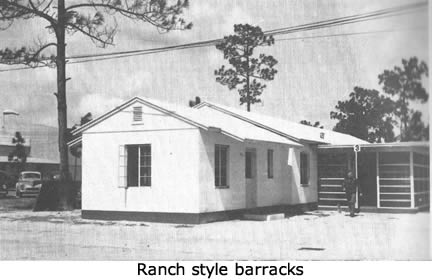 The College airport was therefore converted into an army air field. The original flying field measured 800 X 2600 feet and served as the original base of operations for the first class of cadets. The first hangar and headquarters building were completed in November, and the second class of Cadets arrived. The athletic area consisted at this time of one volleyball court.

On Dec 12, 1941, President Roosevelt signed Executive Order 8974, transforming the Civilian Pilot Training Program into a wartime program. Henceforth, the CPTP would be “exclusively devoted to the procurement and training of men for ultimate service as military pilots, or for correlated non-military activities.”

The airfield now comprises the northeast corner of the main air field.
The City of Douglas and Coffee County were responsible for construction of the extended air field and auxiliary air fields.

The acreage of the main base was 482.3 acres. The building areas occupied 40 acres.

Below is the historic timeline through 1941 that affected the Douglas 63rd Army Air Forces Flying Training Detachment and its Prmary flying school:

For more detailed information, see Early History to Dec 1941 (a declassified 27 page PDF document) This will open in a new browser window.