After completing Primary Training at Douglas or another primary school, the cadet went on to Basic Training. The name is confusing in that it is not simple or beginning. Basic Training for pilots involves ever more challenging flying equipment, planes, and fighting techniques. Primary training was accomplished in aircraft such as the PT-17, PT-19, PT-22 and PT-23 while basic training took place in mostly the BT-9, BT-13, BT-14 and BT-15.

“During basic flight training, a cadet received approximately 70 hours in the air during a nine-week period. The basic cadet made military pilots of those who had learned only the fundamentals of flight in primary school. In addition to operating an airplane of greater weight, horsepower and speed, such as the BT-9 or BT-13, the cadet was taught how to fly at night, by instruments, in formation and on cross-country from one point to another. Also, for the first time, he was operating an airplane equipped with a two-way radio and a two-pitch propeller. This was the point in his career where it was decided whether he would go to single-engine or twin-engine advanced flying school” (National Museum of the U.S. Air Force). 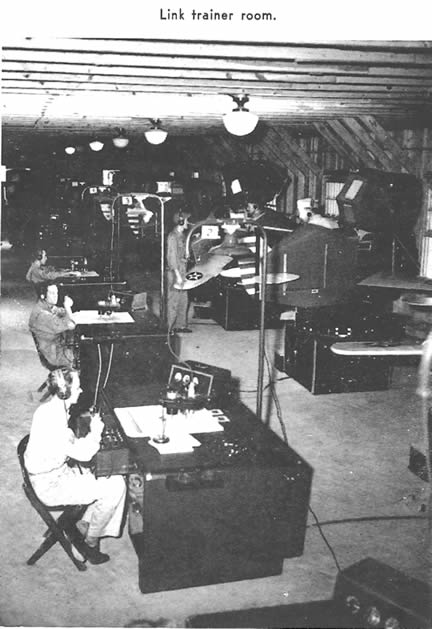 Below is the excerpt from the 63rd AAFFTD Yearbook on “Life in Basic Training.”

Stepping on to the whirligig of basic school, the cadets first warm glow of enthusiasm soon changes to puzzled bewilderment. The very speed with which he is carried both in his new ship in the air and in the classroom on the ground reminds him of an old phrase he heard quite often in the first week of training: “Wipe that smile off your face, Mister.”

In addition to more difficult flying technique, he steps into even harder military routine, and to the casual observer his thrust-out chest is likely to appear as the only visible part of his anatomy. His memory, constantly being polished up on matters of military discipline, begins to shine like the wings he strives for.

The weight of the world is on his shoulders when after four or five hours instruction comes the day when he must take his heavier and faster ship up for “solo.” It is only after this accomplishment that he begins to warm up once more to the possibility that he still may have the makings of the world’s hottest pilot. By the day of his second solo he is getting downright eager.

But always present, outstriding by just one step his rising enthusiasm, are the upperclassmen to keep his “eagerness” at half throttle. Once he is allowed to sit on  the “little red stool” or to count himself a member of  the “Eager Squadron,” he may be convinced that no one  is perfect—not even himself—that all is not perfect, and that maybe he is even a “gross” cadet.

At basic he makes his first sundown trek to the flight line, and, after many anxious moments, and by the light of the moon (if he is lucky) he shoves his plane up toward the constellations and realizes he is making his first night flight.

By this time also, he has learned that there is such a thing as “flaps,” and has learned how to use them. With his hair standing on end he perceives there are times to use flaps and times not to use flaps.

Finally, comes that day when he happily watches the upperclassmen  move on to Advanced Training. A self-satisfied smile spreads across his face, for now HE is an upperclassman.

Immediately, he turns to the new arrival from Primary and barks, “Brace there, Mister . . . Where did you get so gross? What country club did you come from?”

There is little time to “lord it.” His time now is taken up sunk in navigation problems to prepare him for cross-country flights. He is quite busy getting a firm hand on his tricky BT.

Basic seems to become very “gross” toward the end. The cadet becomes conscious of a new world, the last to be thoroughly toured before he gets his commission to the world known as Advanced Flying School.

Click one of the links below to read up on the training sequence: