(Excerpted from the 63rd AAFFTD Yearbook)

Seasoned and well-drilled, with a fair idea of what military life is about, pilot trainees arrive at one of the Army Air Forces Training Center’s elementary flying schools.

These schools are civil airports under contract to the Air Forces. They have lost their indolent look of Sunday afternoon. The leisure is gone out of them. No groups of civilian pilots loll around in leather jackets. No variety of civilian ships hang around in the afternoon sunlight. The ships now are all blue and yellow trainers — or PT’s. They go up one after another in steady drone. Their motors make a business-like, determined cadence in the air. The atmosphere is calmly serious, for here at elementary school is where the cadet must prove whether or not he has the “stuff” to become a military pilot. 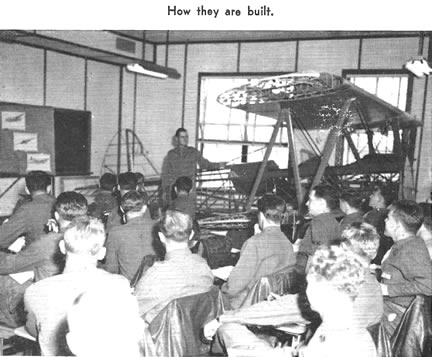 His instructor is a civilian. Before the elementary period is up, this instructor must be able to say to his student: “You have the inherent ability to fly. You have proved it by soloing within from eight to 12 hours. You have taken your ship up and brought it down countless after countless times. You have done infinitely more than this. You have gone up alone and done acrobatics. You have fought back your uneasiness and done loops and snap rolls. You have put your ship in a bad spin and have brought it out which, as I say, proves nothing at all except—you are ready to go to Basic School . . . and luck go with you.”

That is all a cadet can hope to get from elementary school, a solid foundation in flying and a boost into a more difficult curriculum. A considerable number of all who enter elementary school never realize this hope, since they “wash out” for lack of “inherent flying ability.”

Thousands, however, do make the grade. From the Primaries every nine weeks pour a new crop of cadets, men assured of only one thing — that they can fly a PT, understand its simple movements, and comprehend its rudimentary instrument board.

They take with them to Basic School this experience—and hope.

Flying blithely through the air may be the dream of many a future pilot when he arrives at a primary training school, but the actual art of successful piloting is no fantasy. The cadet finds that it’s a combination of hard work, intense concentration, a fear of the “washing machine” and an intangible something that he either has or he hasn’t.

He arrives at a primary school and after being quartered and fed, reports early one morning at the flight line for his first ride. With four or five other cadets comprising his group, he is assigned to an instructor. First he has to learn how to don a parachute, which is an art in itself. He then climbs info the rear cockpit and sits down to look it over. A ‘stick,’ two rudder bars a throttle, an altimeter end tachometer are the chief instrument’s he must learn to use in governing the flight of his ship.

First he hooks on his gosports, which are rubber tubes through which his instructor can talk; and much to the consternation of many a ‘dodo,” he learns there is no way to talk back. Ready to go, he “shoves the coal” to his “crate” and taxis in S curves, for better visibility, out to the runway.
All clear, the cadet, with a slight sinking sensation, inches the throttle forward as the ship gathers speed, gradually applies forward pressure to the stick. Then, just at the right time, he hauls back on the control and pulls the nose up into a long, shallow climb.

A fleeting glance downward causes the cadet to gulp a couple of times to keep his heart down. The ground drops swiftly away. He circles the field to gain altitude, all the time being careful to conform to the local traffic pattern.

At last he reaches the altitude for straight and level flight.

“Left wing too low—Pull ‘er nose up—Watch that tachometer, she’s revving too high—Ease back on the throttle—Hold a little right rudder,” the instructor cautions.

Correction after correction burns up the gosports as the instructor’s monologue becomes a steady drumming in the ears of the chagrined cadet.

As days go by, the cadet learns the “feel” of the plane, becomes dexterous at the more simple maneuvers of flight arid recognizes the various plane altitudes and their relations to maintaining his course. He is now ready for that glorious experience when, for the first time, with high spirits and sinking heart, he takes off, flies and lands, without the comforting companionship of his instructor. He solos.

After the “solo” he becomes familiar with various acrobatic maneuvers. Slow-rolls, snap-rolls, loops, spins, chandelles and lazy eights are part of the concentrated training program.

Then suddenly after weeks of primary training, he gazes upon a new world. A world he dared not even dream of heretofore—the world of Basic Flying School.

He is no longer a “dodo.” He rapidly is developing info an Army Air Forces pilot. If he ever had a sinking sensation upon looking at an airplane he probably has lost it by now, and when anyone asks him if he can fly, he can answer “yes, sir” in a low, reserved tone— but with one eye cocked toward days to come.

Click one of the links below to read up on the training sequence: