(Excerpted from the 63rd AAFFTD Yearbook)

After completing the tests in the Classification Center, the new Army Air Forces man in assigned to a pre-flight training school for a training course prior to being sent to a Primary Flight School.

Future pilots who are to receive their pre-flight training are sent to one of several fields, where they undergo nine weeks of intensive training. 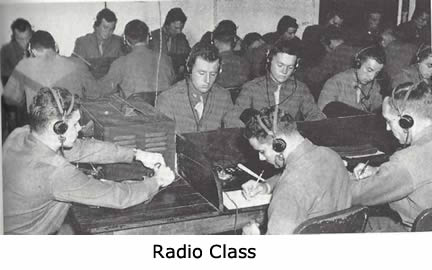 The training program for the pre-flight pilot is in three major divisions, stressing athletics, military and academic work. They are given one hour a day in athletics and one hour is devoted to military training. The military training consists of close order drill which tends to improve military carriage and to teach discipline. Each man is drilled in the elements of military courtesy and receives actual practice in firing the 45 caliber pistol. 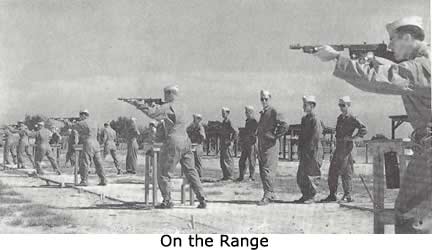 Army Air Forces, the Army, current events, types of Air Forces equipment and armament, command and administration in small units, the firing of the 45 caliber pistol, and defense against chemical attack.

Each four and one half weeks, a new group is sent in from the Classification Center to the Pre-Flight Pilot School and each class moves up. The upper class members have their first actual practice in some of their training as they take charge of the new pilot students and get the new group settled. As the new group begins their nine weeks course, the upper class moves into the final phase of their training before graduating to the Primary School.

The Pre-Flight Navigator is sent from the Classification Center to one of several Navigator Pre-Flight Training Schools, where he undergoes nine weeks of training which is basically the same as the preflight pilot. There the work is divided into the same three categories with their academic work placing more stress on mathematics. Their other studies include Morse code, air forces, flags of all nations, ground forces, physics, naval forces, meteorology, photography, maps and charts, communication, procedure, cryptography, and target identification. 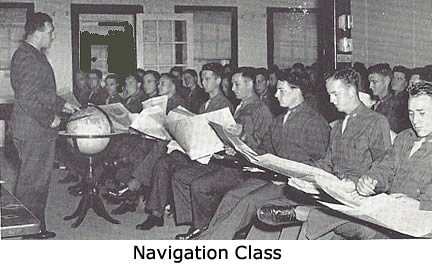 They are also taught military discipline and the proper ways of safeguarding military information. They spend five hours each day in these classes with new classes coming in every three weeks. Their military training consists of 45 minutes each day spent in close order drill and inspections each Saturday. During the nine weeks’ course the men are also given some training in chemical warfare and the use of gas masks and how to recognize the various types of gases.

The Pre-Flight bombardier in sent from the Classification Center to one of the many bombardier schools where he also is subjected to the nine weeks of basic pre-flight training. His academic training lays particular stress upon work in bombardment aviation and particular training in observation from the plane. Other courses are practically the same as those required for a pre-flight navigator.
All

Throughout the first easy “half hour” at the Classification Center and the nine weeks of pre-flight training, the would-be pilot, navigator, and bombardier, all have one thought uppermost . . . to do their best and to get one step further along the road that leads to . . . WINGS.